Marlay Park is a great place to walk, to bring the kids for a run around or to catch up with friends over coffee and cake in the Market. It’s also the starting point of the Wicklow Way, one of the best known long-distance walking routes in Ireland (127km).  Usually done in stages, the first stage to Knockree (21km) can take up to 7hrs. We opted for a shorter hike, setting off early at around 9.30am – I’d never seen the car park so empty! 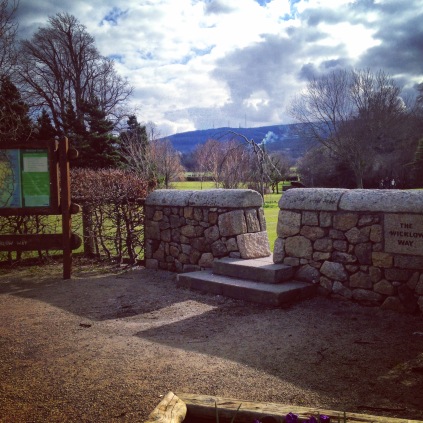 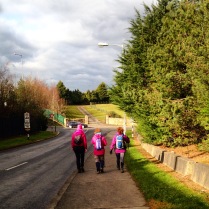 The weather was perfect, a real Spring feel in the air. We made our way to the top of the park (not a buggy in sight), out onto College road and passed under the M50 motorway towards Kilmashogue. It wasn’t long before we were away from the traffic.  From here, it was uphill all the way but I was glad for the exercise. It was a beautiful walk through Tibradden woods, reaching Barnacullia two hours after setting off. We had somehow taken a wrong turn earlier adding half an hour or so. Too much yapping!

The views of the city were spectacular, the Poolbeg Chimneys clearly visible. A perfect place to rest and refuel. 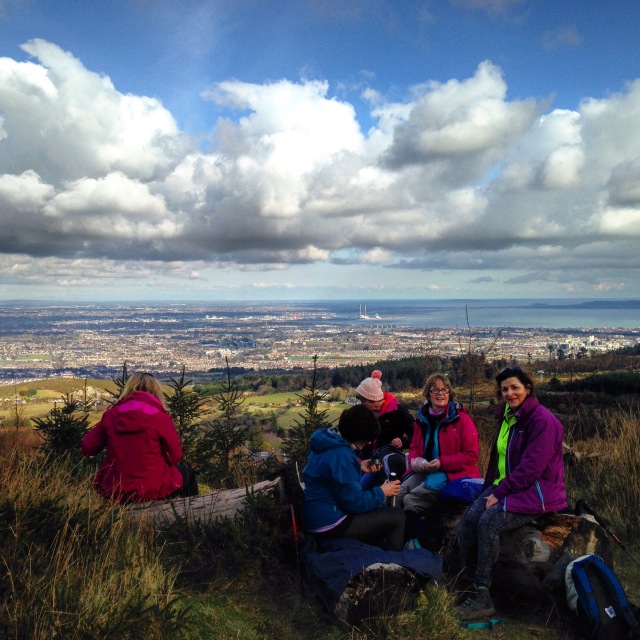 Although we could have kept going, we were happy to turn back. I was looking forward to coffee and some treats in the Market.

We arrived back to the top of Marlay Park around 1pm, it was much busier than earlier. Lots of buggies! Families and friends out walking, young ones playing football.

I was craving coffee and a vanilla chocolate éclair from the Armelle’s Kitchen stall – hands down the best éclairs I’ve ever tasted. Delighted to hear they’ve just opened a new shop in Dalkey. Check it out.

A lovely Sunday walk. The Wicklow Way is definitely up there on my list!

If you like Guinness and craft beer this is definitely a place to visit. For over 100 years, The Open Gate Brewery has been an experiential brewery at St James’s Gate where Guinness brewers have explored their recipes. Now open to the public for the first time ever, visitors can try examples of experimental beers and brewers project beers created for other markets around the world, but not currently available in Ireland.

Located on Thomas Street, just past the famous St James’s black Gates, this brewery is open to the public on Thursday and Friday evenings from 5.30pm to 10.30pm via bookings in advance.

I got the chance to check it out recently following a tour of St James’s Gate by invitation from Diageo (handy when your sister owns a pub!) A couple of the brewers greeted us on arrival and shared information about the experimental brewery and their job. A lovely, enthusiastic bunch, it was obvious they were passionate about their work!

After the tastings, I wanted to check out some more beers so I went for the Guinness Golden Ale. I found it quite sweet and a little fizzier than I expected, but happy I tried it.  I’m not going to pretend to be a craft beer connoisseur and I like my Guinness so after that I stuck to the black stuff  – no better place than at St James’s Gate! 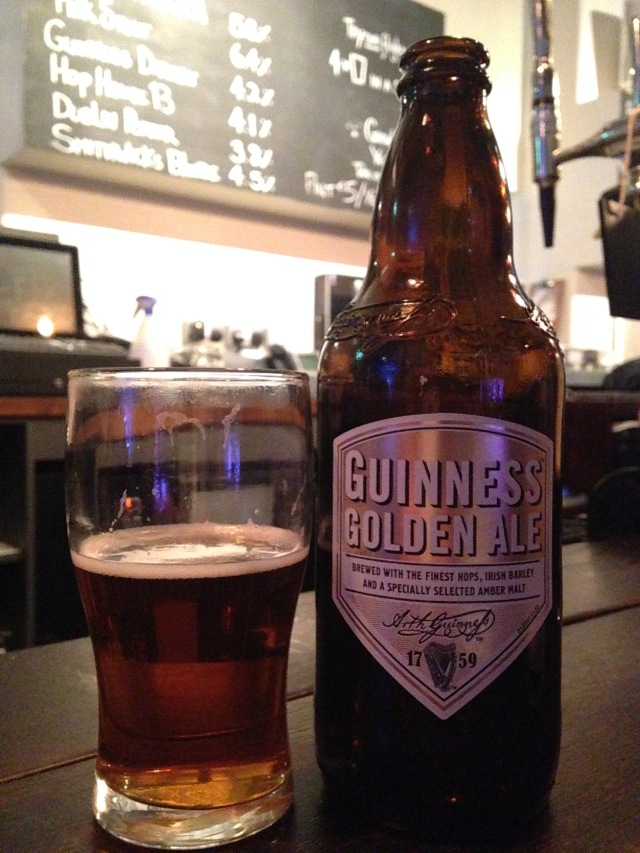 All the staff were really friendly and answered questions about the beers and the brewery. (They also charged my iPhone). I asked if Guinness tasters really existed and I was told that up to 22 tasters come together every morning to do their work – mostly women too because apparently women taste things better!

The Open Gate Brewery is a great place to visit and good value too given its exclusivity. Tickets are €6 per person and include a beer tasting board. You can check availability and book your tickets here

Every second, 26 pints of Guinness are consumed in Ireland!

Growing up in a family pub business in Dublin, Ireland surrounded by pints of the black stuff, I always had an interest in the story behind Arthur Guinness and the incredible success of his legendary stout spanning over 255 years. So when my fabulous sister, who now owns the pub, invited me to join her on an exclusive tour of St James’s Gate Brewery courtesy of Diageo, I was delighted!

The tour group was mostly made up of representatives of several pubs from around the city so it was great to have the opportunity to meet other pub owners. We met at St James’s Gate reception where we were warmly greeted by the lovely Diageo rep, Harry. Brand ambassador, Padraig was our super guide for the day and he walked and talked us through the massive historical site, starting off at Brewhouse No.1 where it began in 1759. If you look closely in the pic above you’ll see the Brewhouse with the clock on the exterior.

So Arthur Guinness was Born in Celbridge, Co Kildare in 1725. When he was 27 years old he received inheritance of £100 from his godfather, which he used to set up his own ale brewery in Leixlip, Co Kildare. A few years later, in 1759 he signed a 9,000-year-old lease on a small, disused and ill-equipped property at St. James’s Gate. Ten years later Arthur was exporting six and a half barrels of Guinness beer to England. However in  1799, a dark beer from London was becoming popular in Dublin so Arthur made the bold decision to stop brewing ales and perfected his black beer instead (thank goodness)!

We continued to the next Brewhouse on the tour but unfortunately it wasn’t open to view. By 1838, St James’s Gate had become the largest brewery in Ireland and the largest in the WORLD in 1886, with an annual output of 1.2 million barrels! Today it is still the largest brewer of stout in the world.

The Brewery had doubled in size, accommodating its own railway system, cooperage and barley maltings. It was known as ‘a city within a city’ and had its own medical department, fire brigade and canteen for its staff. 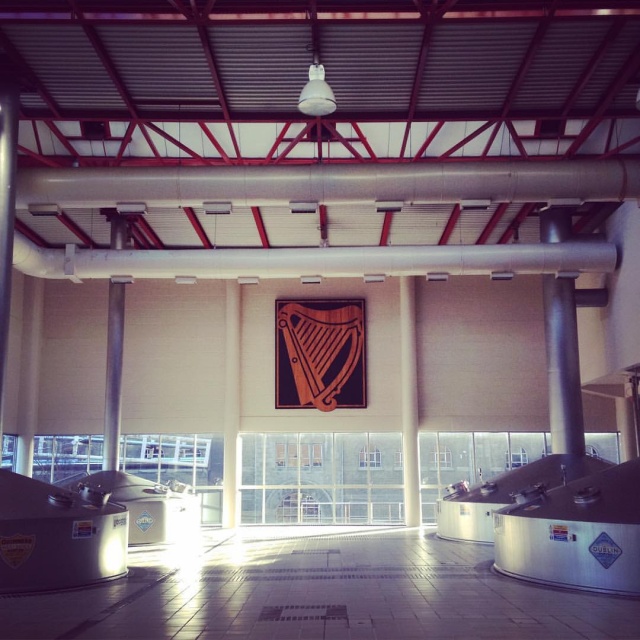 We made our way to the third Brewhouse (pictured above) where a number of large portraits and photographs are on display along the walls of the staircase leading to the vats. Impressive but nothing compared to what we were about to see next on the tour – the newest and mother of all Brewhouses, Brewhouse No.4, which opened in 2014.

To get to Brewhouse No.4 we took the underground pedestrian tunnel that runs underneath St. James’s Street. Long and narrow, it reminded me of London’s Tube and we later learned that the man who designed the London Underground also designed this tunnel.

As we came out of the tunnel it was like stepping into the future. The only reminder of the past was the distinctive smell of the hops and malted barley wafting through the air. We approached the massive Brewhouse No.4 facility, which looked like something out of NASA. The new brewhouse is 10,000 square metres and one of the most technologically advanced and environmentally sustainable in the world. It produces 27 million pints a week and has the capability to produce four million pints a day!

Impressed and thirsty, we didn’t think it could get much better until Harry (our friend from Diageo) announced our final destination, The Open Gate Brewery for some beer and food tasting. Read about it here

Itching to get out for a hike after a long, wet January, my friend Jane suggested the Bray to Greystones cliff walk – a stunning walk! 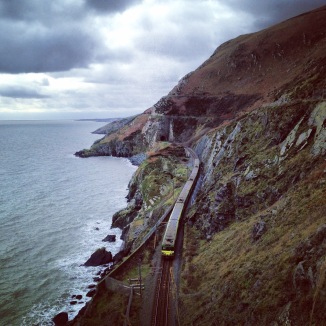 The cliff walk is one of the most popular walks in Bray for locals and tourists.  The walk is not challenging. It is about 6.5 km (one way) from the bandstand in Bray to Greystones Harbour and fairly even throughout.

Approaching Greystones you can see the harbour development underway but it doesn’t take away from the beautiful views. Plenty of food places are nearby too! 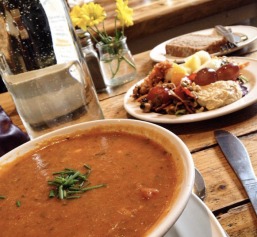 The Happy Pear  in Greystones is the perfect pit stop to refuel with hearty, wholesome goodness. The chunky Moroccan soup is delicious with a selection of healthy breads and the salads are bursting with flavour and colour. There is also an array of tempting desserts. The place is buzzing and it is difficult to leave the warm, comfy seats but gathering our coats, gloves and scarves we set off for our return journey home.

There is a train station in Greystones where trains usually depart for Bray every half hour. The train journey takes around 10 minutes, however the walk back to Bray is just as lovely and not too painful!

Thank you Jane, the Bray to Greystones cliff walk in Wicklow is always beautiful, whatever the weather.

Wicklow, also known as The Garden of Ireland, is at the heart of Ireland’s Ancient East. To find out more check out Visit Wicklow